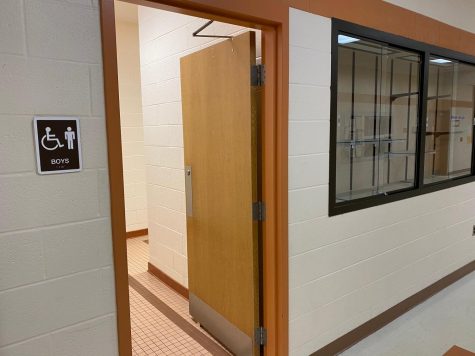 For the first part of this school year,  Huntingtown High School  bathrooms have been locked for a multitude of reasons. Many students and staff members were confused as to why some bathrooms would be open and then locked at later times, and were unhappy with being late to class because the bathroom closest  to their classroom was locked. To examine the problem more fully, the journalism team interviewed student Mikey Ramos, and administrator Mrs. Grimes to provide their thoughts on the issue.

Mikey Ramos believes that it was unfair that bathrooms were locked especially if a student had a class on the first floor and the only open bathroom was on the third floor “because it’s time consuming” If he needed to stop at his locker as well, he would likely be late. Mike also said that if several bathrooms were  locked and he went to multiple other bathrooms that were also locked, then that was time consuming as well and contributed to being late. He says though that when he did find a bathroom that was unlocked it was normally very packed and led him to do more waiting. Mikey also admits that he had been late a handful of times because of having to search or walk across the school to find a bathroom. It was Mikey’s assessment that bathrooms normally got locked because of vandalism and the grouping of students in the bathroom as well.

To get answers as to why the bathrooms were locked, the journalism team decided to interview Mrs. Loren Grimes, an administrator and vice principal at Huntingtown High School. Mrs. Grimes explained that there w

ere various reasons for bathrooms being locked. If there’s an out of order sign the bathroom is literally out of order. At other times a bathroom may get closed for vandalism, such as someone ripping mirror off the wall, and during certain times of the day the school would lock them to prevent students from gathering there and vaping or engaging in other activities. She stated also that it would help to prevent bathrooms from being closed if students report any vandalism they see and any grouping of people in the bathroom to an administrator. She also stated that if students who were late because they had to walk across the school to a bathroom, that their punishment for being late would have taken in account the fact that there were no open bathrooms near their class.

Because of so much student dissatisfaction with bathrooms being locked, the school administration has decided upon a different policy. In light of this, Mrs. Grimes agreed to do another interview with me where she told me about the new policies for the bathrooms. She informed me that a bathroom will now only be locked for vandalism or because it is out of order. Instead of closing the bathrooms to prevent vaping and other unwanted activities, the office has decided to leave the bathroom doors open for both boys and girls.

In conclusion, the bathrooms being closed was a topic many students at Huntingtown were passionate about. The office’s hardworking employees found a solution that made everyone at Huntingtown happier and made daily activities at Huntingtown easier by students not having to walk across the school to find an unlocked bathroom. 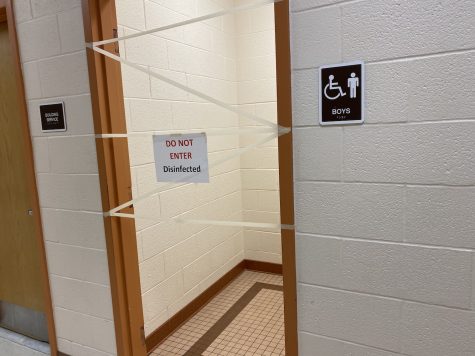 And for now, with the break for Covid-19, bathrooms are closed to all – along with the entire school.  (See photo at right)