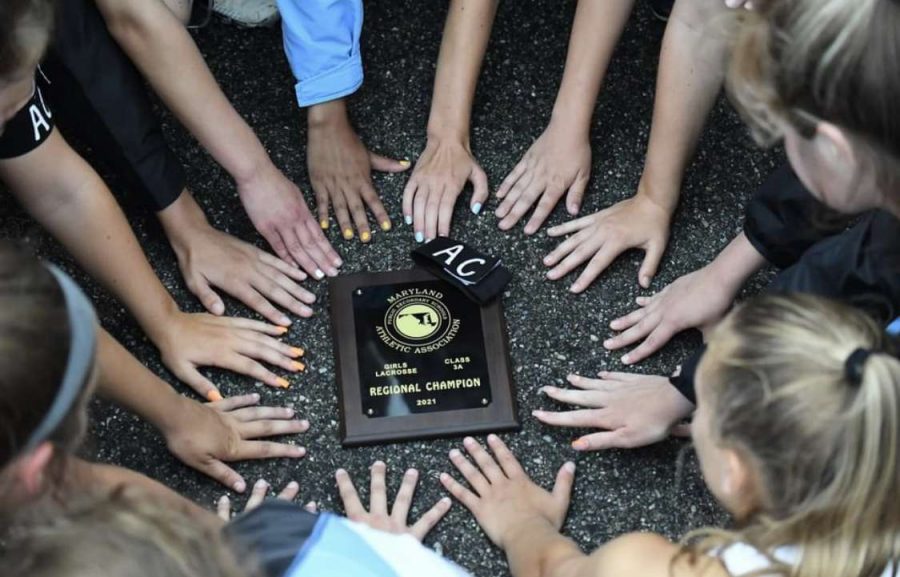 The regional title is ours!

All of us were circled together in the locker room. Not a word was said as sniffles and muffled cries bounced off the walls. I looked at my teammates and my coaches with their puffy eyes and sweaty brows. “The first thing I wanted to say is that I’m proud of you girls,” spoke Maggie Pike. I looked down at my stick, gripping it until my knuckles turned white. Who would have thought it would be like this, I thought…

Just a year before, I picked up the same stick from a shelf at Dick’s Sporting Goods. “I like the feel of this one!” I said as I held it up to my dad, who visibly looked like he wanted to head home. He shrugged as Dads usually do and went along and bought it. As we walked out of the store, I gripped my new stick with feelings of excitement and uncertainty. There was one thing I was certain of, though, and that was the fact that my journey would not be an easy one.

Unfortunately, that was about all the excitement my freshman season would bring. I played about 5 minutes in our scrimmage against Broadneck High School, went home, and awaited our ominous two week “spring break.”

Moving forward to my sophomore season, I was feeling nervous for tryouts. My heart raced every time I picked up my stick and my hands got cold and flimsy. As a newbie, knowing that there was a player limit for the team didn’t do me any good. I mean, this is Maryland, the lacrosse capitol of the world! I was trying out for a spot that countless other people were trying out for as well. The only difference was the amount of experience we had. I went in on that Monday in April with my head up high and played the best that I could. And my best was enough to make the practice team. I wasn’t bummed that I didn’t make the playing team, varsity is varsity in my book. The thing that got me really pumped up was what Coach Maggie said to us when we all made the team: “For the practice players, if you play your hardest, and prove that you have the passion to be here, then you can be moved up to the playing team.” And to me, those words were the sole purpose of my goals and hard work for the season. I wanted to show everyone that I could be just as great a player as them, even without the skills and experience.

With that being said, I made it my mission to be the best player that I could be. Our first game against Calvert High School was coming up quickly, so I spent my time with Coach Rob, our practice coach, learning anything I could about the game with the hopes that I could see the field. And my hopes turned into reality! I saw about eight Ish minutes in the game, which isn’t that much, but to me it felt like a lifetime. Everyone was shouting different plays and calls. To be completely frank with you, I had absolutely no idea what they were talking about. The ball whirred passed everyone’s head, sticks sliced through the air like swords and the defense stood against me like a brick wall. Rain drops pounded my skin, soaking my hair and blinding my glasses. I felt like instead of playing lacrosse, I was playing a game of tag just running helplessly around the field. Most of my other experiences on the field weren’t all that exciting either besides catching the ball here and there. After that game I made a promise to myself that I would become more useful and not just act like some lost kid.

As the season progressed, I could feel myself getting better, my passes stronger, and my endurance increasing. I could tell my teammates and coaches noticed it too. I would strive to be the first person to arrive at practice, and the last person to leave. I realized that in order to stand out amongst the crowd, I needed to work ten times harder than everyone else. I needed to hustle to every ground ball, be more communicative, and most importantly, I needed to watch how my teammates and upperclassmen played the game.

Being a part of Coach Rob’s practice squad, I found myself paying attention and watching everything the playing squad did more often than playing at some points. Never in my life have I seen those girls want anything more then to win. Their work ethic, stick skills, and hustle were seamless. It was almost as if they could telepathically communicate to one another. I remember even when the girls would sub out for different skill sessions, they would always continue to practice by passing to one another or using the bounce back. There was no one who did it better than Emma Schiemer. If there was one thing I learned from watching her, it was that she was an excellent leader. When I was standing on the sidelines, I could hear her shout the loudest, which was something I truly admired about her as a player. Playing against her was a totally different experience, though. There was a drill that we all did towards the end of practice one day where Em and I were paired up with each other. She was on attack, and I was defending. I looked directly in her eyes before Coach Maggie blew the whistle. That girl’s eyes had such a fierce determination to them. It was incredible. 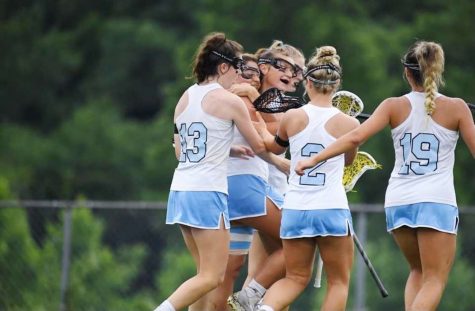 Other than that, I would make mental notes of the qualities that I appreciated and admired from the older girls. For Hannah Schiemer, I noticed that she was always patient with the practice group and was willing to help any of us help if we needed it. Emma Pike’s trust in her teammates makde everyone so much more confident in themselves. For Aggie Gullace, she would always give it 100% when taking her draws. Ally Weaver was always open to trying new things too! One of the most prominent qualities I saw in Kenley Zeruto was her self-confidence. She never doubted herself once, and to me, that is what made her such an excellent player. There are countless other things I noticed too, but these were the traits that I felt I really needed to apply to myself. Watching them play made me realize why I am so in love with the sport, and that instead of striving to be the next Emma Pike or Kenley Zeruto, I wanted to become the first Elizabeth Polo and leave my own impression on the team. I wanted to be the person opponents shut out. I wanted to be titled game princess. And most importantly, I wanted everyone else to know who I am. And right now, the only way of doing that is to study and practice to my fullest ability, so I can make every effort count.

When playoffs came around, I surprisingly wasn’t nervous. Having practiced with everyone for so long, I was confident in their abilities because I knew we all wanted to win more than anything. Our dream was to win the state title. As we won both the region title and quarterfinals, I realized that our shared goals and dreams were what made this team so special, it’s our legacy even. For seniors, they take it as their last umph before they head off to college. For the underclassmen this is their first time in playoffs, so they have nothing to lose. While we entered playoffs playing for our own dreams, we also played for the unforgotten dreams of Ally Cambell, one of our players who passed away back in 2019. Even though I never met her, I could tell that her impact on the girls changed their lives forever, because this isn’t just a team, this is a family.

Unbeknownst to it being our last game of the season, we got ready to play Marriotts Ridge High School in the semifinals. It was honestly the most amazing game I ever witnessed. Both teams were giving their 100% on the field, the cheers whenever a goal was scored- It was a true showcase of skill. As the game progressed and the gap in the score increased, it was clear which team would move onto the championship. The last whistle blew, and the game ended with a score of 4-14.

We walked to the locker room in silence as we waited the speech our coaches were about to deliver. Although we lost, I found myself smiling. I looked around the room at my teammates and down at my hands again. I remembered a saying that one of my old coaches told me once: “Look at your hands kid. They tell your story. When you cried your hands brushed away your tears. When you fell, your hands pushed you back up. The only thing you can do now is to take your hands and let go of the past, and grasp towards your future.” When I looked back up at my teammates, I didn’t look at them as the girls who lost. I saw them as my sisters. Sisters whose hands tell their own stories. Sisters who found and hold the sport of lacrosse deep in their hearts. And that’s purpose of why I play: To be a part of this Sisterhood