“I think that ‘school is out for two weeks,’ will forever stand as the greatest institution of false hope I have ever received.” — Austin Hickey.

It is my firm belief that Thursday, March 12th, 2020, will perpetually be remembered as “the day it all began.” The governor’s mandate. The smiles. The tears. The sports games that wouldn’t be played. The performances that would never see the stage. But what I remember above all else was the palpable uncertainty that ensued the next day, Friday the 13th.

“Two weeks,” they told us. “It’ll only be for two weeks.” Books, uniforms, instruments, and who knows what else were left in lockers and classrooms. The hallowed halls of Huntingtown High School were emptied, making it appear like a ghost town that had stopped in time. After all, we would be returning by the end of the month, right?

By the time that small eternity lapsed, those two weeks turned into a month. A month morphed into six. Before we knew it, September was approaching, and schools across the country were scrambling to make plans for the continuation of our education. Initially, Governor Hogan commissioned that Maryland’s schools would remain closed for the foreseeable future. But on August 27th, he announced that the decision to reopen would lie with the counties. Calvert County originally dictated that public schools would remain online for the first semester, though there have now been plans for an earlier return for younger students.

Until that day comes, students must merely wake up, open their laptops, and switch on the power button to learn. And as paradisiacal as that may sound, the real question remains: “How is it going?” 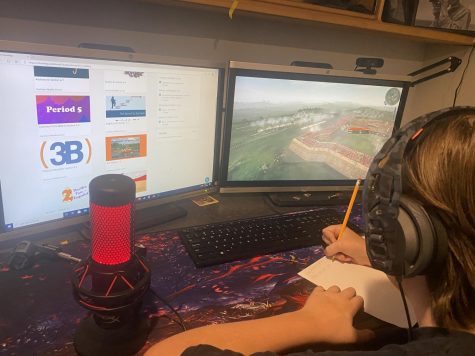 I’m not going to lie.  The concept of waking up around 8:30, sitting at my bedroom desk, and donning a pair of sweats is much more appealing than the alternative. But looks can be deceiving. As Sophomore Jonah Caudle explains, “Online school is like a double-edged sword. While it’s easier for students such as myself to keep an organized schedule… it isn’t flawless, and it’s far from ideal.”

In a recent survey conducted by Huntingtown High School’s faculty, over 57% of students reported that they are spending much more time on homework in a virtual setting than in last year’s normal learning environment. Along with this heightened workload, 60% of surveyed students claim that they spend more than five hours on homework per week, and 40% of those students spend around ten to fifteen hours per week. That may not sound like a lot, but I’d like to invite you to picture yourself sitting at a computer for seven to eight hours every day, soon followed by at least one to three more hours of assignments. If you take multiple AP classes, the homework load is likely to grow rampantly. Perhaps you have a job, sport, or other responsibilities to juggle on top of it all. “Learning has never been so hard,” one student laments. 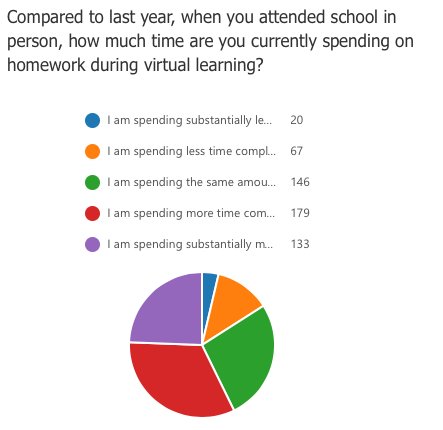 This data makes it obvious that with the start of the virtual school year, the majority of students’ workloads have been growing exponentially. “I feel like students are given a lot more work because teachers think we have more time on our hands when that’s not the case,” another student writes. Of course, in the long run, it would be beneficial if students wereretaining the information.  But are we learning anything?

It’s hard to speak for the entire student body, but hundreds of the survey’s responses implied a sense of drowning in anxiety and mental distress. One student puts it this way, “It’s very hard for me to learn like this when every single assignment is homework, and the online class environment is not one that promotes learning for me. I don’t retain anything I learn in the online classes – all they’re teaching me about is due dates and homework.” This same student later emphasizes their busy workload and other responsibilities that can’t be met after sitting at a computer for the majority of their day. It’s hard enough being a high school student, but as this student mentions, the environment can make all the difference.

An environment can be immensely influential. The energy of a party can determine how early you leave. The mood of those around us can, in turn, alter our own. And in terms of schooling, the environment affects nearly everything. By merely being surrounded by those of our same age and interests, the overall learning experience can be heightened. If you don’t understand something, you can easily lean across your desk and ask a classmate what they got for that particular math problem or pull a teacher aside and confide your lack of comprehension. It’s been that way since kindergarten.

Since those early years, we have been conditioned to learn and (somewhat) thrive in a specific environment: raising your hand when you have a question, collaborating with classmates, and interacting with each other. But when COVID-19 slammed itself into this selfsame system, everything previously known about a learning environment was forced to be forgotten. Faces have now been replaced with black squares and initialed circles, and emails and Reminds restore vital, in-person conversations and interactions. This may not affect all, but many students find it extremely difficult to alter how they learn.

In the survey response, one student speaks of their personal struggles regarding online school, namely how difficult it is to complete work while students and teachers are speaking on the Teams call. “If I was in school,” they write, “I could mentally tune out background talking, because there is a volume change in a person’s voice according to how far away they are from me. But through a computer, everybody’s voice is the same volume.” They explain that muting the volume would hardly solve any problems, as teachers might say something important while they’re completing their assignments.

One survey respondent complains  “It’s very hard for me to learn like this when… the online class environment is not one that promotes learning for me.” And unfortunately, there are many students who concur with this sentiment.  “I don’t feel like I’m grasping my teacher’s concepts at all,” claims another. “I am way better face to face, and I feel uncomfortable asking questions where everyone is listening in.” They continue to emphasize the difficulty of not having a quiet place to learn, which may not plague many, but is nonetheless concerning.

One particular perspective caught my eye, and I found myself fervently agreeing with their statement: “It is very difficult for me to focus on anything school related while in an online environment, because my brain doesn’t register that I’m actually in school.”  This is something I, along with many of my schoolmates, have been struggling with. Personally, I prefer to separate my learning and home environments because it tends to reduce stress while improving my focus.  But as these have now been combined, I almost feel like my whole class is invading my personal and separate life, especially if my camera is on. Though there’s hardly anything we can do to fix it, the online environment seems to remain a large interference when it comes to online learning.

“I was under the impression that we were not supposed to be assigned work on Wednesdays,” a student writes, “yet I always receive a good amount of work.” In Huntingtown’s survey, about 60% of students delineated that they spend more time working on assignments than the recommended 30 minutes per class. “I’m not trying to complain or anything… but [Wednesdays] have more amount of work than a regular day, which is mostly due the night it’s assigned,” one student claims. Another simply writes, “They give us too much work on Wednesdays.”

On Huntingtown High School’s official online school schedule, Wednesdays – soon to become Fridays – are described as, “an opportunity to build background knowledge and content understanding… Examples may include, but are not limited to, pre-recorded video lessons, resource videos, assigned readings, independent practice, paper/pencil learning activities, rotation/center activities, and posted assignments.” Additionally, it explicitly states that “Students should create a schedule that works best their day that allows them to engage in 30 minutes of Independent Learning Time for each class period.” For an average student with a full schedule, this should total to about 3.5 hours. 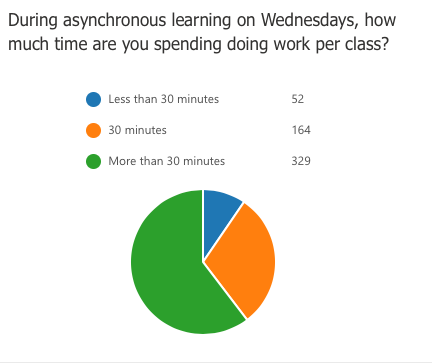 An overwhelming majority of students report that on these “independent learning days,” they are assigned work that is either sometimes, often, or always due that same day.  Though teachers are well within their educational rights to assign 30 minutes of work every Wednesday, many students are struggling as the time spent working usually proceeds half an hour for every class.  “It would be better if Wednesdays were used as days to finish the work that was not completed in class, rather than have teachers add more work for students to do,” suggests one student. “It makes it unmanageable and harder for me to complete my work. Usually, I spend all day doing work with limited breaks… to step away from my computer.” Another merely writes, “Teachers shouldn’t have to give a lot of work to us on Wednesdays.”

It isn’t any mystery that many students are struggling with such an adjustment, but as I read through the hundreds of perspectives regarding online school, I was surprised to see how many times the word “stress” appeared. This is reflected in a survey statistic that reveals about 64% of students describing their workload as stressful, some of whom claim it’s “extremely stressful.” Furthermore, the average ranking of mental wellness of surveyed students is 2.92/5. This could be considered normal during a normal school year, but combined with heightened workloads, the pandemic, and other stressful world events, this number should be considered very seriously.

One student quite blatantly expresses, “Schoology is incompetent and the stress from the workload is ruining my mental health.” As revealed in a previously mentioned statistic, the workload for many has been rising. Whether it’s due to longer class periods, teachers compensating for the lack of in-person learning while trying to follow the curriculum, or any other factors, it’s safe to say that many are experiencing a more copious amount work than they’re used to. Luckily, about 67% of surveyed students reveal they have ways to cope and handle such stress. About the same amount concede they are effectively coping with this stress as well. 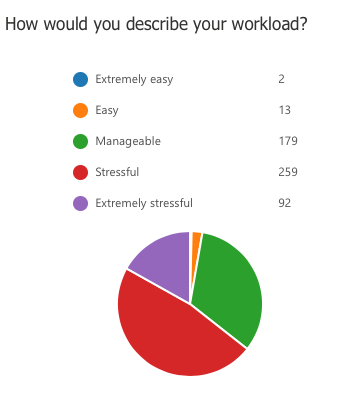 experiencing strenuous amounts of stress while simultaneously still having personal ways to deal with it. Nevertheless, there remains nearly hundreds of survey responses that all voice the same message: We are stressed, and we want to go back.

Through all these negatives, complaints, discouragements, and inconsistencies, it should be considered that we are lucky to live in a county that has the physical safety of their students at heart. While many of us are struggling with this new adjustment, it is vital to remember that Maryland is keeping their numbers much lower than other states’, and online school could very well be a key factor for that curb. And though case numbers are on the overall rise, hopefully this pandemic will morph into a repressed memory, and before we know it, we’ll be able to walk through the great halls of Huntingtown once more.